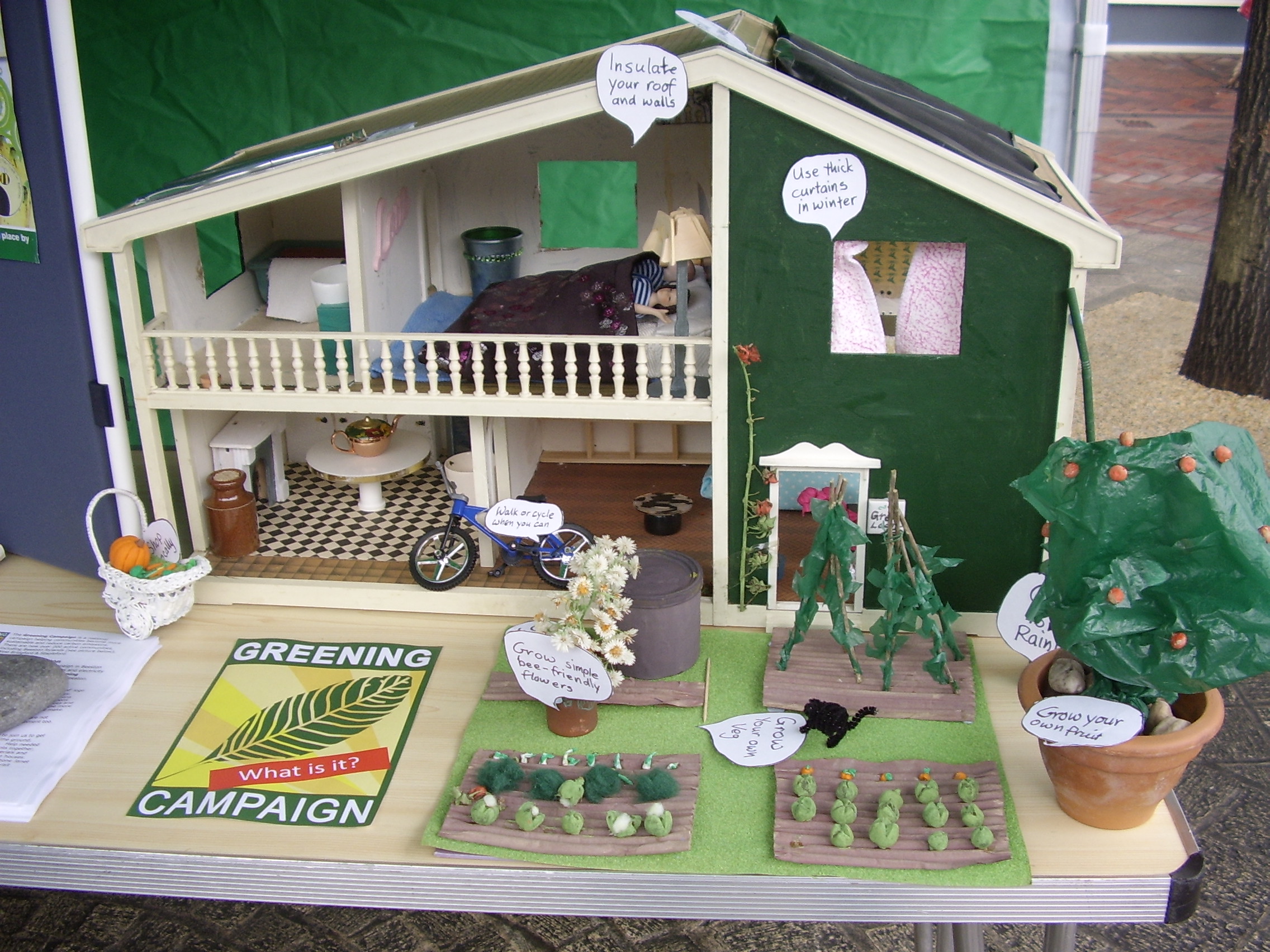 Greening Beeston began in 2009 when a group of local people joined a campaign to help Beeston residents make a difference to the environment.

Our initial aim was to reduce consumption of energy and water as part of the national Greening Campaign, supported by Broxtowe Borough Council.  We held a big launch event in 2010 and then distributed our green leaf cards to houses in the Rylands and later in Beeston South and Central.

People were to display the card in a front window, once they had undertaken at least 5 out of a list of 9 suggested small actions to help the environment.  They were mostly simple steps that also save money, such as:

•   walking or cycling when possible,

From the number of cards displayed and data from the Greening Campaign we were able to estimate how much those households had reduced their carbon emissions and water use.  We were pleased to find that many people making small changes could really make a difference - roughly 7.5 tons of carbon dioxide and 115,000 litres of water per year.  That is enough to fill 75 hot air balloons with CO2 every year!

As well as the serious message of saving energy and water we have tried to make it fun.  At one event we had a competition for children to see who could put on as many warm clothes as possible - jumpers, hats, scarves and gloves.

Based on an idea found on the internet we entered our Green Christmas Tree in Beeston Parish Church’s Christmas Tree Festival.  It was made from branches cut from a tree in a member's allotment - later composted to avoid increasing the carbon footprint through transport and disposal.  We used recycled items to decorate the tree, such as sweet papers, bottle tops, orange peel, berries and pine cones, with green messages on some.

Early on we were slightly puzzled to be given a dolls' house but then realised that we could fit it out with green ideas such as solar panels, a water butt and a garden made from recycled items, with green messages attached as speech bubbles.  This was fun and it also proved very popular with children on our stall at various events - encouraging their parents to talk to us.

How can we be more environmentally friendly?

Beyond our core energy-saving message we have covered other environmentally-friendly activities, especially avoiding food waste with its energy implications.

A group of us visited the local recycling centre to find out what happens to the contents of our green bins.  We want to discourage waste of all sorts and subscribe to the 3 R's – not the school activity - but Reduce, Re-use, Recycle.  Those inspired another 5 R's: Refuse (such as no carrier bag, no ice in drinks), Repair (can someone repair it?), Rot (compost it), fReeze (sorry!) (for left over food) or Re-imagine (think of another use, e.g. a scoop made from a plastic milk bottle).  We have recipes for using up food that is in season and encourage locally grown food (no food miles).  Our planters in Chilwell Road and at the Canalside Heritage Centre demonstrate how to grow your own food.

We have had many events such as seed and plant swaps, as well as recycling and litter-picking.  We have continued to take every opportunity to encourage more people to understand about Climate Change and to make changes with more energy-saving tips.

The ideas are on hand-outs and on our website, where we also have links to other information about other environmental topics, such as how to compost (avoid waste miles), cycling, public transport and a member's website about their experience of eco-renovations (insulation, double-glazing, ...).  Our website also has seasonal recipes (to reduce food miles) and we have our own Recycling website (where in Beeston to recycle things that can't go in the green bin).  We have really enjoyed hearing about other people's ideas and for one Heritage Weekend we looked for ideas from the past that our grandparents had used, such as war-time recipes and Make do and mend.

Anything we can do to help Nature is also important and we were pleased to hear of the Civic Society planting trees.  We encourage gardeners to think of Nature, encourage wildlife and avoid harmful pesticides as well as peat-based products, which destroy peat bogs and release CO2.  A new idea from Felixstowe is to create a Community Nature Reserve which involves many people devoting part of their gardens to Nature.

Share and Co-operate, there is so much to be done

Being inspired by what other groups are doing brings me to what I consider a lovely aspect of what we have been doing: it isn't a competition and we really want to share ideas.  We actually hope people in other places will copy anything good that we are doing, and for them to inspire us with yet more ideas.  I have met many wonderful and inspiring people through Greening Beeston and some have kept in touch even after moving away.  We have already made a difference but we know so much more needs to be done.

"In several years renting, you've been by far the best estate agent I've ever dealt with. [Tenant for 2 years]"
Sam Genway